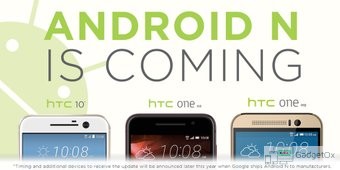 Android N dev preview 3 is live now and in a good news for HTC fans, HTC has announced and confirmed future availability of Android N update for its high-end smartphones.

Here are the HTC smartphones that will certainly get Android N in future:

Life is about to get a little sweeter. Android N will be coming to the HTC 10, HTC One A9 and the HTC One M9. pic.twitter.com/dj9fcZHNnH

Android N comes with many new features like split-screen mode, so more than one app can be run simultaneously, or picture-in-picture mode so you can watch a video on the corner of the screen while browsing the web or checking email. It can also be used to respond to messages from a notification overlay (Direct Reply) without exiting your current application.

You can read about all the Android N new features, changes and Release timings by going to our massive Android N coverage page.