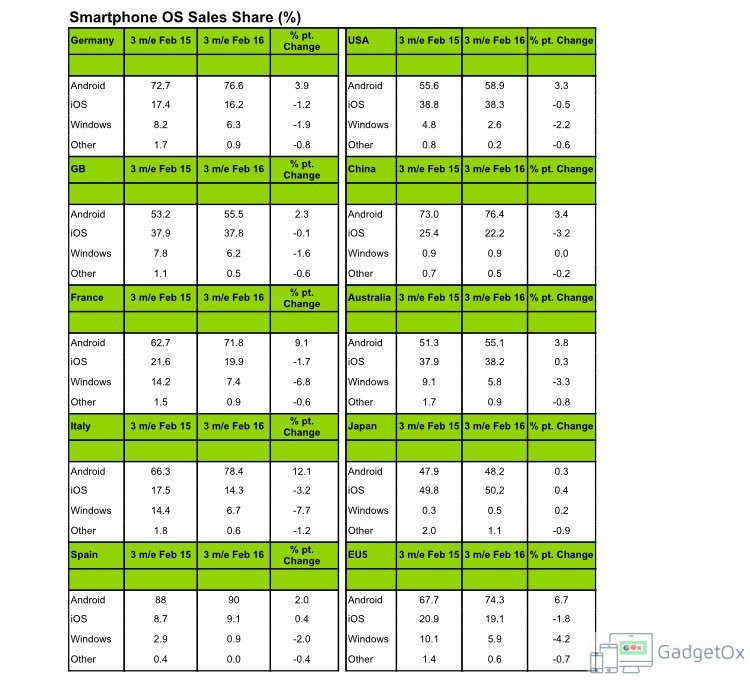 It seems like the trend reversal from one year back when iOS was winning market-share from Android across the globe. Kantar WorldPanel’s latest report for three months ending February 2016 has some good news for Google and some tense moments for Apple’s execs. Android is on market-share growth spree and has snatched as much as 3.4% market share in China from iOS. In US and Europe too Android has made year-on-year gains while iOS and Windows Phone has suffered losses. Check the trend for individual markets in the big table above.

As per Kantar’s report,

The latest smartphone OS data from Kantar Worldpanel ComTech for the three months ending February 2016 shows that Android increased its sales share in urban China to 76.4% from 73% in the same period a year ago. In the US and EU5, Android continued to make year-on-year gains. Europe’s big five markets include Great Britain, Germany, France, Italy, and Spain.

“For the first time since August 2014, iOS share did not grow in urban China in the 3 months ending February,” said Tamsin Timpson, strategic insight director at Kantar Worldpanel ComTech Asia. “iOS declined 3.2 percentage points between February 2015 and February 2016. Huawei was able to recapture the top spot on the Smartphone brand leader board, capturing 24.4% of Smartphones sold in urban China, just ahead of Apple’s 22.2%.”

“While Android’s share grew steadily in the EU5, performance varied considerably by market, underlining the impact that Huawei and local vendors are making in some markets,” noted Dominic Sunnebo, business unit director at Kantar Worldpanel ComTech Europe. “In Great Britain, 42% of the smartphone market falls in the premium category, and Huawei’s premium spec devices offering very good value for money have not yet tempted enough of Great Britain’s consumers. Android will be counting on Samsung’s new flagship devices to challenge Apple’s dominance.”