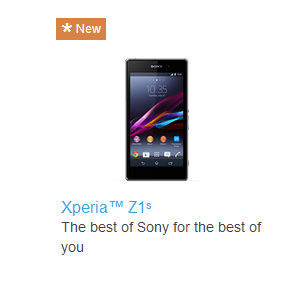 You may remember, evleaks posting press renders of Sony Xperia Z1S and many of us taking it for international version of Sony Xperia Z1F which packs 720p, 4.3 inch display with quad-core 2.2GHz Snapdragon 800 processor, 2GB of RAM, 16GB of storage, NFC, wireless charging and a 2300mAh battery.

Now, the device has been caught sneaking on official Sony website and pulled later. In the meantime, Xperia Blog has managed to take screenshot of the device.

Appearing on the official website may indicate a sooner release for the device and is certainly good news for Sony fans and prospective customers.