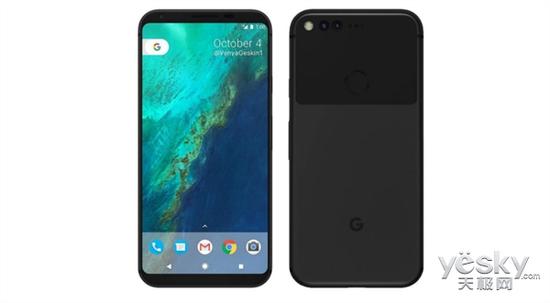 Google always introduces a new version of smartphones whether it’s Nexus or Pixel in Fall of each year. The company dropped Nexus lineup in 2016 to make gap for it’s own Pixel smartphones.

The successor to Google’s​ Pixel smartphone will be called Pixel 2, as reported previously. The Google Pixel 2 was already spotted on the benchmarking site Geekbench with codename Taimen.

Now we have the very first render of upcoming Google Pixel 2 smartphone. The leaked render shows us Google Pixel 2 with design inspired from current gen Google Pixel smartphones.  As per the leaked render, the Google Pixel 2 smartphone comes with a new display which has an aspect ratio of 18:9, similar to what we’ve seen in LG G6 and Samsung Galaxy S8/Galaxy S8+.  The render also shows us a nearly bezel less display on the front. It has got a metal + glass design on the back which is similar to the current Pixel smartphones. The fingerprint scanner is still located at the back. The 2nd gen Pixel smartphones come with a dual camera setup on the back with 16MP sensors. On the front, it will have an 8MP sensor for selfie lovers. Another key feature of Pixel 2 is a new SoC. Like the Pixel, Google will introduce a new SoC with the Pixel 2. The chipset to be used in Google Pixel 2 will be Qualcomm Snapdragon 836, which will be an incremental upgrade over the Snapdragon 835.