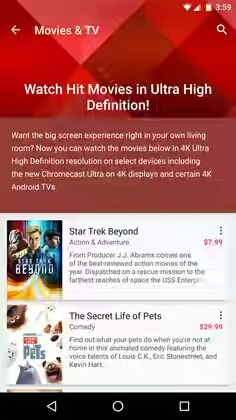 Google Play Movies and TV app for Android is much used app all over the world. .The Google Play Movies & TV was launched 5 years back. Till now, it has received a great user support from across the globe. It is now available in approximately 117 countries.

Starting today, Google Play Movies now offers more than 125 movies in 4K resolution, using VP9, so that you can enjoy them in the highest quality. Starting in the U.S. and Canada, you can purchase 4K movies on your Android device or on the web and stream them on your Chromecast Ultra, your Sony Bravia Android TV, or your Xiaomi Mi Box 3.

In October, we launched Google Play Movies & TV together with the Daydream VR platform, so you can now watch all the movies and TV shows in your Google Play library in a virtual cinema, even if you’re offline.

The Google Play Movies & TV app is now available on 2016 model Samsung Smart TVs, which means that movies and TV shows already in your library are immediately available to watch directly on your new Samsung Smart TV. Or use your Samsung TV remote to browse our selection of new release movies and next-day TV shows and start watching something new right away.