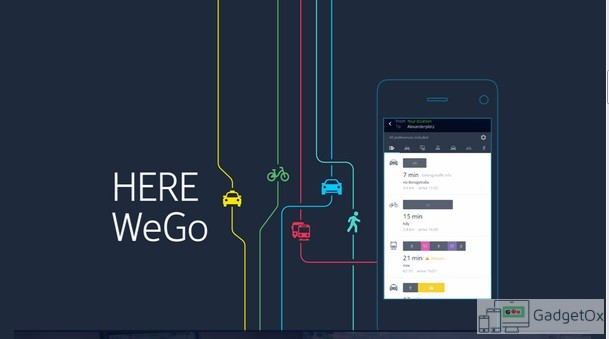 HERE Maps has been re-branded as HERE WeGo with a new update rolling out to its iOS and Android apps. The update brings UI and functionality changes. The new app design makes destination the focus, as the new name HERE WeGo also suggests.

The first change is a simple one, but it’ll save you time and it helps people get straight to the primary function of the app.

When you open HERE WeGo, the ‘Where to?’ instruction in the search box invites you to enter a destination. Input this, and you’re taken straight to choosing between different modes of transport to get to where you want to go – without that extra click on the ‘find a route’ icon that used to be at the bottom of the screen. Bam!

The new Route Comparison screen is where you’ll see additional information in HERE WeGo, and also the most design changes.

Starting today we are beginning to roll out new transport options. In the many major cities in which it operates, alongside the existing car, public transit, cycling and pedestrian options, you’ll find new options from car-sharing firm Car2Go. This will show you where the nearest available cars are on the map, with the estimated cost of using the rented car to get to your destination, the fuel level and more details about the car. You can even just press a button to launch the Car2Go app and reserve a car on the spot.

In addition, in many cities*, you can get taxi information for your route – the latter including approximate fare, wait time and a call button.

We will be adding taxi information for more cities and more car sharing services over coming months.

Last, but by no means least, bicycle routing is once again improved – now with elevation profiles – so you can judge available routes by the effort required, as well as updates on what’s coming next.