Skip to content
You are here
Home > Latest Posts > News > Science News > Astronomy > Humans can be on Mars within Decades, timelines of NASA’s Mars Plan reveal. 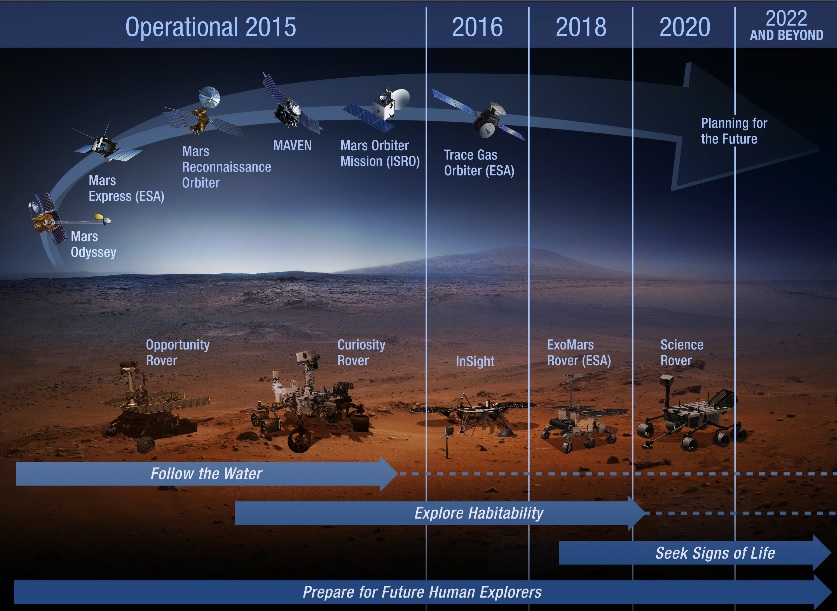 After announcing its findings of presence of Liquid Water and Ancient Lakes once upon a time on Mars, NASA has now shared its next steps for ambitious “Journey to Mars” plan that culminates with landing of Humans on Mars within decades. Here is how the timelines look like. It seems by 2020 and beyond, NASA will be in advance preparation stage of landing Human Explorers on Mars.

The Human Explorers not only be able to live on Mars but also will try to be self-sustainable and would be able to transform Mars’ resources into water, fuel, air, and building materials. Here are some important excerpts from NASA’s shared Mars plan statement.

Becoming Earth Independent Part of the journey to Mars is increasing our knowledge base and assessing
plans and architectures that are affordable and sustainable. When the first pioneers ventured to North America, they found familiar resources in the new land and adapted to their environment. Future pioneers of Mars will have to adapt to a more foreign, hostile environment. We will need new technologies to transform local resources into water, fuel, air, and building materials.

Therefore, in parallel with planning and implementing Proving Ground missions, NASA is leveraging current and planned robotic missions and studies to better understand challenges and opportunities that will inform the design of future systems. Earth Independent capabilities include those validated in the Proving Ground, Mars surface landers, advanced and efficient ISRU, surface mobility, permanent surface habitats, and crew transfer vehicles, such as the Mars ascent vehicle or a Mars vicinity crew taxi. These capabilities enable an integrated and sustainable campaign to pioneer space.

NASA is planning to develop a strategy to complete “Mars-ready” habitation system testing on Earth and on ISS before embarking on landing of Human explorers. Completing its preparation in phases, NASA and its partners will also develop an initial habitation capability for short-duration missions in cislunar space during the early 2020s and evolve this capability for long-duration missions in the later 2020s.

We are closer to sending humans to Mars than at any point in NASA’s history. We will journey in phases, leveraging our experience on the space station to step out into the Proving Ground of cislunar space—the volume of space around the moon featuring multiple stable staging orbits for future deep space missions. Over the next decade, NASA and our partners will use this Proving Ground to practice deep-space operations with decreasing reliance on the Earth, gaining the experience and systems necessary to make pioneering space and the journey to Mars a reality.

NASA, together with its international and commercial partners, will develop a strategy to complete “Mars-ready” habitation system testing on Earth and on ISS. NASA and its partners will also develop an initial habitation capability for short-duration missions in cislunar space during the early 2020s and evolve this capability for long-duration missions in the later 2020s. A modular, pressurized volume would enable extended stays by crews arriving with Orion. This initial habitation capability in cislunar space would demonstrate all the capabilities and countermeasures necessary to send humans on long-duration transit missions to Mars.