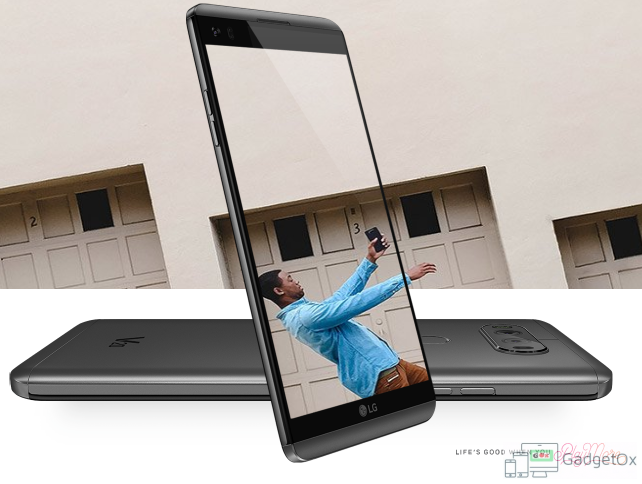 LG has finally announced their latest flagship device called the LG V20. The LG V20 is the current gen device in company’s ‘V’ series of smartphones that was introduced last year with the LG V10. The LG V20 comes with a secondary display for notifications and some other quick actions. The LG V10 was launched as a new series of smartphones with some more rugged design, a larger screen than the LG G series and has a new ‘Always On’ secondary display.

Some of the major hardware specifications of the LG V20 include a 5.7-inch Quad HD (2160x1440pixels) display.  There is one more secondary display of 1.8-inch (160×1040 pixels) resolution. The LG V20 gets 4GB of LPDDR4 RAM. There is 64GB UFS 2.0 internal; storage in the LG V20. For those who want further increment in the storage, the company is providing a micro SD card slot which can be accessed just by removing the battery back. The LG V20 gets a Quad-Core Qualcomm Snapdragon 820 processor. There is unique dual camera setup at the back side of LG V20. We get 16MP camera with F/1.8 aperture and OIS and there is one more 8MP camera on the back with f/2.4 aperture.

The LG V20 is a device that looks more close to the current LG ‘G’ series which is that LG G5. But the company hasn’t opted for the modular design like the LG G5. It has a little clean design like the LG G5. The design it has is little bit on the robust side instead of the clean design like the iPhones & Samsung Galaxy S/Note series devices.The design is what we can call it a little ‘Bold’ move from the company . The device has anodized aluminium body. The volume buttons are on the left which have the new iPhone 6/6s like design.

From the front, it looks like the year old Blackberry Z10. Bezels on the top and bottom are very narrow, thanks to the secondary display. Narrow bezels has always been the USP of LG devices. The back is removable. Removing which you’ll see the removable battery inside the LG V20. The LG V20 gets software buttons. Placement of the power button is little bit odd but it will help few users with smaller hands. The power button is located  on the right side but has been shifted to little bottom side.

Now if we take a look at the back of the device, there is a big camera module. The camera module consists of dual tone LED flash, dual camera and laser auto-focus. The fingerprint scanner is also located at the back. The fingerprint scanner in the LG v20 is circular in shape. The back cover is removable with MicroSD card & sim card slots. Battery inside the LG V20 is also removable. The Lg V20 is tad slimmer than the LG V10 with dimensions of 159.7 x 78.1 x 7.6 mm compared to 159.6 x 79.3 x 8.6 mm of the LG V10. It is lighter in weight with just 174gms compared to 192gms of the LG V10.

It was already confirmed by the company that the LG V20 is world’s first smartphone to feature 32-bit Hi-Fi Quad DAC, powered by ESS Technology, the designers of high-performance audio products.  The claims that the LG V20 delivers studio level audio experience with the LG V20.

The LG V20 comes with a good camera setup. There is dual camera setup on the back which is 16MP+8MP sensors. The company used single camera in the LG V10 smartphone but not now.in the LG V20, we have the dual camera setup. But the case is different in terms of front camera as the LG v10 has dual camera setup at the front but the LG V20 comes only with a single camera at the front side. The company is also touting it’s Steady Record 2.0 feature which is achieved with the Qualcomm Snapdragon 820 chipset. The Snapdragon 820 chipset uses both electrical image stabilization and digital image stabilization to provide more stable shots. The rear camera is also equipped with the laser Auto-focus and PDAF which  will help more in making the image/video more stable and distortion free.

LG G5, the much-hyped about modular LG Flagship didn’t set market on fire. It has now boiled down to LG V20 to make amendments, keep the LG fans glued to brand and at the same time brings others to LG fold. LG V20 is a very appealing smartphone with attractive and robust design, powerful & quality cameras, class-leading audio, great multimedia performance, features like secondary display and last but not the least very good performance. While it doesn’t pack Water / Dust resistance like some other competitors; its robust design and innovative audio features make up for that. We have rated it 8.6/10 based on what it offers. Check the individual ratings below and click here to leave your ratings.

The pricing is not known at this point in time but our sources indicate a competitive pricing to be expected from LG. Stay tuned to know more about pricing and release date.

The second videos shows about the LG UX 5.0+ based on Android Nougat 7.0,