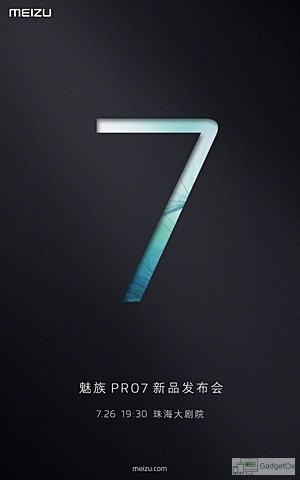 The Chinese company Meizu has officially revealed the launch date of its upcoming smartphone namely Meizu Pro 7. The Meizu Pro 7 has come up in a number of rumors and leaks in the past which led to its speculated launch date sometime of this month, which is why Meizu will be holding an event on July 26, officially.

What could be the most interesting and the highest MSP for Meizu Pro7 is the second-screen arrangement at the back of the device, below the rear camera. It is believed that this arrangement will allow users to take selfies and play games.

In terms of specs, Meizu Pro 7 will either rock the MediaTek Helio X30 chipset while as it bigger Plus variant may pack in Samsung’s Exynos 8895 SoC, although there is a little possibility for 8895 in latter case (see tweet below).

Samsung engineer @killiphone :Exynos8895havent give any other company.So Meizu Pro7&7 Plus wont use 8895