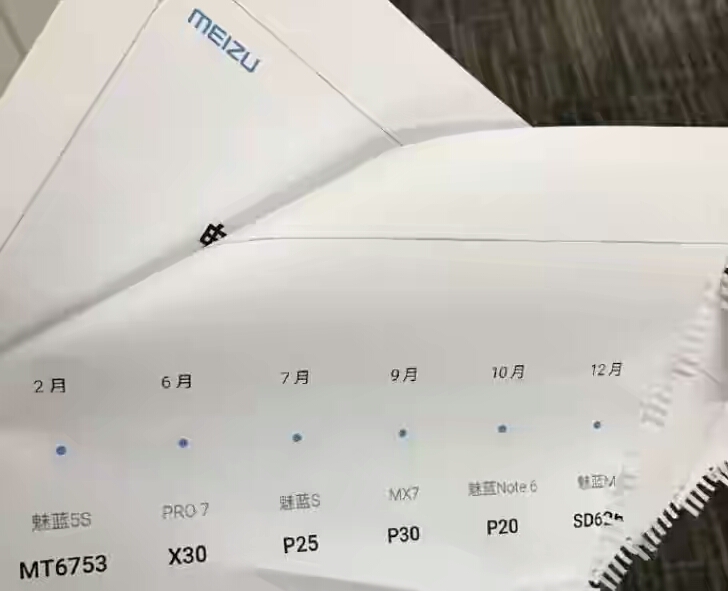 Meizu is obviously working on many new Smartphones currently. The company will be launching new smartphones in upcoming months.

Now we have got the product lineup of Meizu for the upcoming year i.e. 2017 has leaked. The above given image is an internal document from the company. It really tells us about every product the company is going to launch in 2017.

The first Product launch in 2017 from Meizu will be with Meizu M5s with its MT6753 chipset which is an octa-core chipset. It will be launched in February 2017.

The second product coming from Meizu to us in 2017 is the Meizu Pro 7. The Meizu Pro 7 will come with Mediatek HELIO X30 chipset which is a Deca-Core processor from MediaTek. It will be released in June 2017.

The third product from Meizu in 2017 will be launched in the month of July. It will be called thr Meizu Blue Charm S or Meizu Ms. It will come with Mediatek Helio P25 chipset.

Now if we talk about the 4th product, it will come in September. The 4th Product will be the Meizu MX7. It will come with Helio P30 chipset.

And finally in December 2017, Meizu will announce the newest member of Meizu M series. It will be launched with Qualcomm Snapdragon 626 procrssor.

An off course the company can change this plan any day. It’s totally upto them. We could see some more members also in 2017 from Meizu.