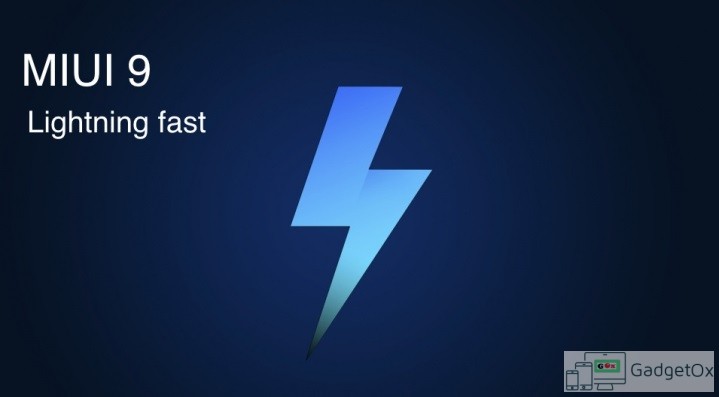 MIUI 9 was announced by Xiaomi at an event in Beijing, China on July 26, 2017. Xiaomi started the work on MIUI back in August 2010 and since then MIUI ROM is being used in 55 languages, 142 countries with a whopping 2.8 billion active users.

In MIUI 9, Xiaomi has strived to offer a great user experience in terms of stability, smoothness, better battery backup and last but not the least, a lightning fast system, which goes well with MIUI 9 tagline.

So, what is new in MIUI 9 and why you should care? Let’s break down the bits one by one and go into the maximum details. We will also take a look at what devices are eligible to receive MIUI 9.

MIUI 9 has been developed from the ground up to be lightning fast and responsive. Xiaomi introduced three new key features in MIUI 9 viz. Image search, Smart assistant, and the Smart app launcher. These features will allow users to quickly and efficiently move around, perform actions with minimal effort.

Of course, there is more to it but Xiaomi has revamped and simplified more than 50 features in the upcoming MIUI release i.e. MIUI 9.

We all aware of the Android’s sluggish behavior after using a device for a certain period of time. Even if your device has the top configuration, you will experience slowdowns in Android system somewhere down the line. This leads us to system optimization. No doubt, the current MIUI 8 offers a great user experience, Xiaomi has put a lot of time and effort in system optimization so that MIUI 9 delivers a great user experience.

The above video uses Mi 6 (running MIUI 9), Huawei P10 (running EMUI5.1) and Samsung S8 (running SE8.1) to conduct the system optimization test. These are brand new devices and apps were installed from the same source. After 6 hours of testing, you can pretty much guess who the clearer winner is*? (*Shorter time means less lag).

One of the major traits of MIUI 9 is accelerated app start up times. As per Xiaomi, app launches happen at the speed of light and users will notice a significant improvement over MIUI 8. But how does MIUI 9 achieve this feat?

MIUI 9 uses optimized haptic feedback, intelligent CPU acceleration, and optimized thread scheduling in achieving this result. So, when MIUI 9 drops, any app whether it be system app or third party app, you will be amazed at the explosively fast app launch time.

Again, a speed test was conducted with Huawei P10 (running EMUI5.1) and Samsung S8 (running SE8.1) under close inspection of an adjudicator. Guess who is the final winner? Watch the video to find out. (50 most popular apps in China were installed)

The Dynamic resource allocation feature in MIUI 9 intelligently prioritizes foreground applications. In other words, less and less CPU+GPU+RAM resources will be invested in the background or minimized applications, hence leaving a bigger portion for the app currently in use. This results in a fluent experience when working with multiple apps at the same time.

Check out the video comparison test to get an idea of how Dynamic Resource Allocation aids MIUI 9 to be lightning fast.

A few to points to take note of:

With the recent advancements in smartphone camera technology, people have become more inclined towards mobile photography as opposed to investing in a professional DSLR camera. Not only are they convenient, but it gives them an instant power to share it with the world via the web.

However, when it comes down to finding that one photograph you took 2-3 years back, for instance, you begin scrolling wildly through a heap of photographs in the gallery until you give up. Not anymore!

With MIUI 9, Xiaomi has incorporated a powerful image search engine powered by AI that can help users to search images by typing relevant keywords, including your conversations. Not only this, MIUI 9 image search is smart enough to look for important documents like identity cards, passport, credit card, bank card and business card etc.

Besides, image search also reads the text in photos and screenshots.

Another feature of MIUI 9 is the Smart Assistant. As the naming suggests, the Smart Assistant gives you instant access to various information and frequently used applications.  Swiping right from your main home screen will take you to smart assistant where you will find almost everything like reminders, meetings, notes, and much more. You can read more about this feature here.

The Smart app launcher in MIUI 9 gives you app suggestions based on screen context. For example, if a user comes across a particular term or name of an unknown person while reading an article in the browser, just long press the name/ term/ item/ links and the relevant info will be shown. For users in China, you can even use this feature to shop without launching the app.

This was one of the most anticipated features for MIUI users and with MIUI 9, the wait is over. The split screen feature basically lets you view two windows in side-by-side fashion. For example, you can enjoy watching a YouTube video and at the same time text friends on WhatsApp.

To enter Split-screen mode, tap on “Recent Apps” key and then tap on “Split Screen Mode” at the top left. Choose the app you want to split from the recent apps, then drag it onto the upper part. Understand more about Split Screen feature here.

Not all apps will be allowed in the Split Screen view, and MIUI apps will automatically determine whether to allow the use of the feature according to its display requirements. For example, Dialer will not support Split Screen.

In the case of third-party applications like WhatsApp, YouTube etc. developers will require them to be updated to the latest versions to support Split Screen View. In case an app doesn’t support Split screen, it means the app developer has yet to work on that to enable it.

MIUI 9 will automatically prioritize notifications for you, depending on what apps you mostly use and how often. This will keep unimportant notifications to the lower end of the tray, while the urgent ones are kept at the top.

In MIUI 9, the home screen editing mode has been redesigned and has now reduced to three icons i.e. wallpaper, widgets and home screen settings.

MIUI 9 introduces 3 new themes along with the default theme. They are 无界 (Limitless), 幻彩 (Color Fantasy), and 炫黑 (Cool Black). Take a look at each theme below.

If you take a closer look at the dock icons at the bottom, they do not have any texts below them. This gives a cleaner look and saves some space too.

Users with the following devices:

There might be slight changes to supported devices list in the future, and also there may be feature variations between China and Global ROM at the final roll public out.

By the time, you might have guessed that the Global Stable release of MIUI 9 will take around 4-5 months from now which is disappointing for Mi fans if all the BETA testing goes well. Also, the final roll out will be made in batches.

In case you are not aware, Xiaomi has already selected the first batch of beta testers and the first closed MIUI 9 China Developer ROM was released for testing on July 27.