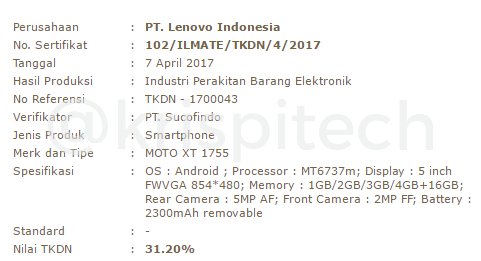 As per the the TKDN listing, the Motorola XT1755 comes with 5-inch FWVGA (854x480p) display. The certification date is listed as 7th April, 2017. Memory options listed is 1GB/2GB/3GB and 4GB which is just test or dummy units. There is 16GB of internal storage with micro SD card support. The chipset used is a Quad-Core MediaTek MT6737M SoC.

For camera and photography lovers, it has got a basic 5MP auto focus main camera with LED flash. On the front, it has got 2MP of sensor