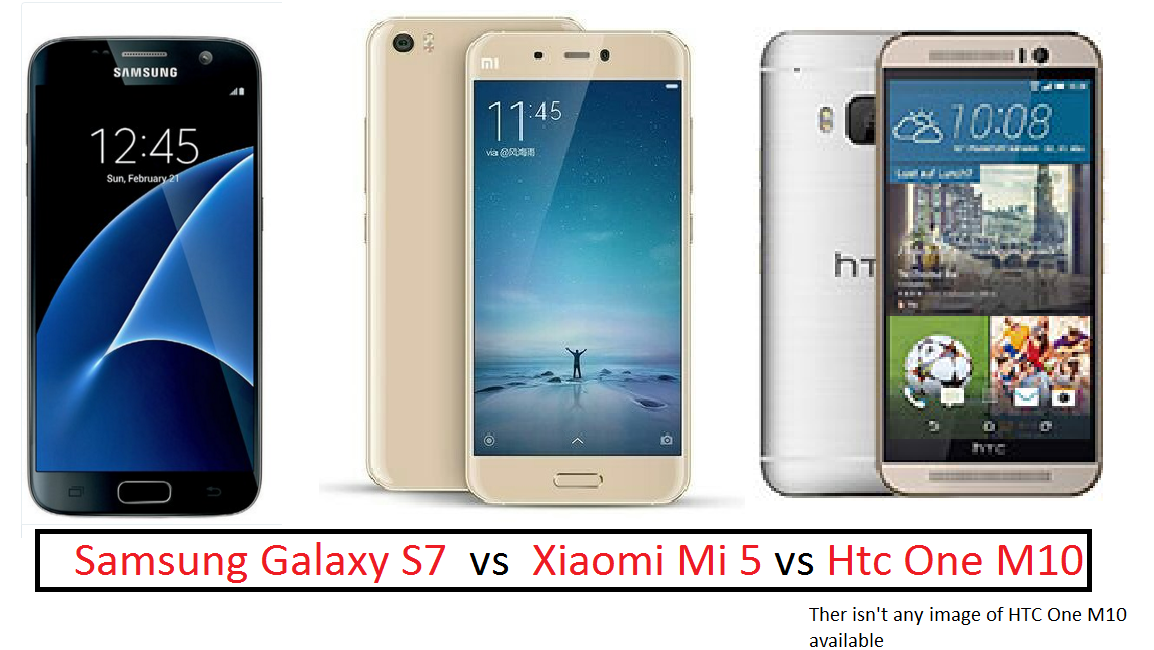 Earlier we compared some high end flagships like Samsung Galaxy S7, iPhone 7 as well as some lower end flagship like Xiaomi Mi5 , Yu YUTOPIA or OnePlus 2. But now we want to start a fight between some high end flagships like Samsung Galaxy S7 with HTC 10 aka Perfume and a lower end flagship Xiaomi Mi5. This seems to be a quite tough war considering all the smartphones are expected to be released in Feb-March time frame. All three smartphones have been launched now and time to compare their strengths and weaknesses.

Every year, we see new phones from different companies  fighting with each other. Each company claims itself superior than other. We have seen a new trend of metal body devices from 2013 but 2015 was a year when more & more companies started adopting metal body design.

This year Samsung is coming with Galaxy S7 which has arrived with the same design which we saw in Galaxy S6 last year but that also was great design. Some official HD images of Galaxy S7/S7 edge were also leaked on the web.

The second device comes in this comparison is HTC One M10 or Perfume. This device has arrived with metal because HTC is making metal bodied phones since 2013 with HTC One M7. This device was a great hit with boom sound speakers on the front

The 3rd device in this list come Xiaomi Mi5. This device also has Metal-Glass unibody design like we have seen in Samsung Galaxy S6 series.

So in this segment, we don’t have a clear winner as all the companies are using metal or glass which makes them premium devices.

In terms of display, Samsung Galaxy S7 packs a 5.1-inch QHD(2560×1440 pixels) Super AMOLED display with Gorilla Glass 4 support on top of it.

The 3rd competitor in this comparison is Xiaomi Mi 5 smartphone .It is coming with 5.2-inch QHD (2560×1440 pixels) display with no details on display protection is clear at this time. It is also coming with a 1080p variant that will be coupled with 3GB of RAM

This is going to be a tough fight between all these three phones. Samsung Galaxy S7 is coming in two variants depending upon the region. One is coming with Qualcomm Snapdragon 820 processor while other is coming with Samsung Exynos 8890 processor.

The HTC 10 or Perfume is also coming with Qualcomm Snapdragon 820 processor or Snapdragon 652 processor depending upon the markets.

Xiaomi has already confirmed that their upcoming flagship Xiaomi Mi5 is coming with Qualcomm Snapdragon 820 processor.

Phone works with a good processor as well as coupled RAM in it. The Samsung Galaxy S7 is coming with 4GB of RAM which will be the fastest available in the market.

HTC Perfume is also coming with 4GB of RAM which is coupled with Qualcomm’s latest gen processor , the Snapdragon 820.

Xiaomi Mi 5 is also having 4GB of RAM but it is worth noting that there will be a lower variant which will be having a 1080p display with 3GB of RAM.

The Samsung Galaxy S7 is expected to come with 32/64 GB  of storage options as well as support for Micro SD cards of upto 200GB.

The Xiaomi Mi 5 is expected to come in 32/64/128GB storage options with or without Micro Sd card slot. because as per latest leaks, the device will be having Hybrid Dual SIM slot which lets you use either two SIM cards or one SIM card with a Micro Sd card.

If we take a look at the official leaked slide from Samsung, teh Galaxy S7 is coming with 12MP BRITCELL camera with greater focus on imaging capabilities like Apple.

In the camera department, the HTC One M10 is expected to sport a 12 Ultra Pixel camera with laser assisted focus.

Xiaomi Mi 5 is expected to come with 16MP camer on the back with OIS, PDAf etc. It is also expected to be greater in terms of focus & imaging components.

While all these devices haven’t been launched officially, we still have some leaked details about all of them.

The Samsung Galaxy S7 is expected to come with 3000mAh battery while the Edge variant will be coming with 3300mAh battery.

The Xiaomi Mi 5 is expected to come with a 3000mh battery same as Samsung Galaxy S7 .

Everything falls apart if you have a buggy or non-stable OS installed in your device. The Samsung Galaxy S7  will be launching on 21st February with Android Marshmallow 6.0 or later with Samsung’s own TouchWiz UI on the top.

The HTC 10 or Perfume is expected to come with HTC Sense UI 8.0 based on Android Marshmallow 6.0 or later.

Xiaomi Mi 5 is coming with Android Marshmallow in it based on Xiaomi’s own MiUI 7 on top of it.