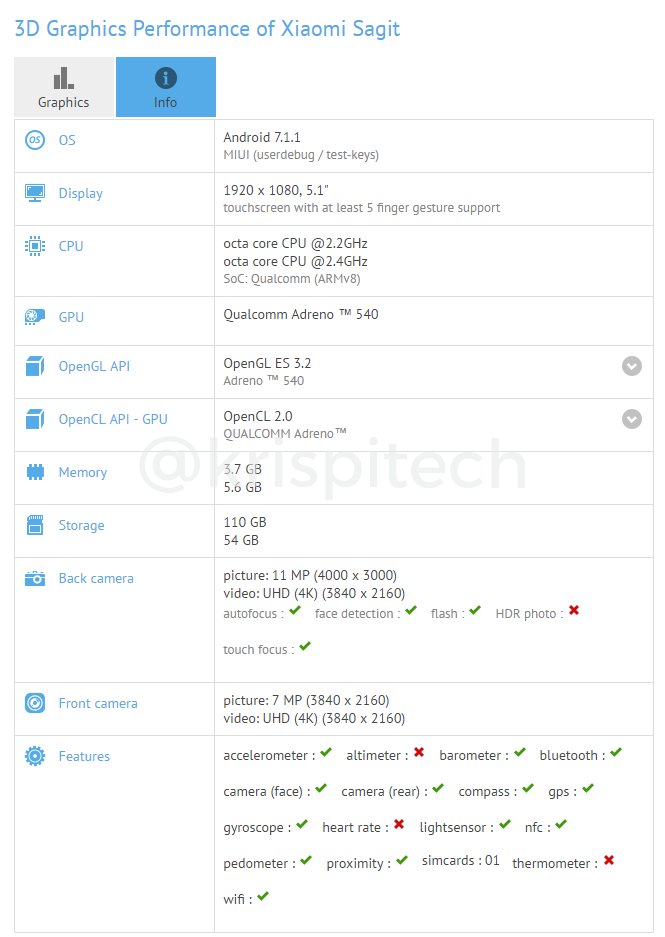 Xiaomi launched the Mi 5 smartphone back in 2016 as the flagship product for 2016 and it did well in different markets.

Now it’s time we should see a new flagship product from Xiaomi for 2017. The 2017 flagship from Xiaomi is known ad Mi 6. We have already seen several leaks about the upcoming Xiaomi Mi 6 smartphone.

We have already shared the full leaked specifications of Xiaomi Mi 6 and Mi 6 Plus. The recent leak talked about it’s specifications and 11th April launch date. One more thing about Mi 6 was leaked that it is codenamed as ‘ Sagittarius’ internally.

But now the Xiaomi Mi 6 has been spotted on the benchmarking site GFXbench with all the specifications listed. The GFXbench listing just confirms previously leaked specifications. It is listed as Xiaomi Sagit on the GFXbench page.

In terms of specifications​, the Xiaomi Sagit or Mi 6 comes with a 5.1-inch full HD (1920x1080p) display which remains same as the Mi 5 in pixels at least. There is an upgraded 4GB and 6GB of RAM options. In terms of internal storage, it has got 64GB or 128GB of variants for different RAM combinations. The chipset used is an Octa-Core Qualcomm Snapdragon 835 with 10nm process. But there’s a catch, the standard variant with 4GB RAM gets Snapdragon 835 clocked at 2.2GHz and the Pro variant gets 4GB of RAM with 2.4GHz max frequency. It is same strategy like the Mi 5 which has underclocked Snapdragon 820 and the ‘Pro’ variant gets full throttling of Snapdragon 820.

The Xiaomi Mi 6 was expected to be unveiled at MWC this year. But due to shortage of the Snapdragon 835 chipset, Xiaomi has pushed it further. Pricing is expected to start for CNY 1999. It is scheduled to launch on 11th.