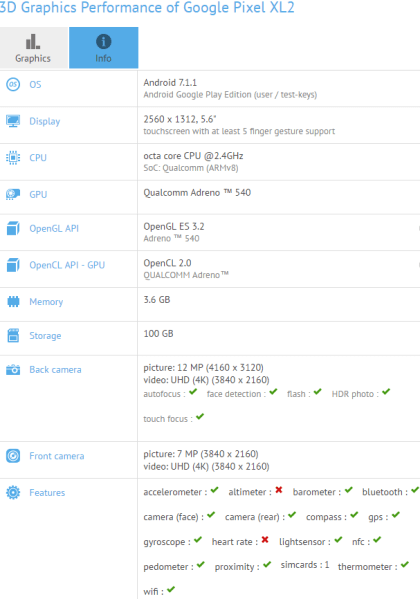 Yesterday we reported about the leaked press renders of upcoming 2nd generation Google Pixel smartphone. The Google Pixel​ 2 was spotted in HD render with 18:9 display and Snapdragon 836 SoC.

Now the bigger brother of Google Pixel 2 has been spotted on the benchmarking sites​ GFXbench.  The bigger brother of Pixel 2 will be called as the Google Pixel XL 2. The GFXbench listing shows it to carry a 5.6-inch QHD display with 18:9 aspect ratio. To make this aspect ratio, the screen resolution has been modified to 2560x1312p. It comes with 4GB of RAM and 128GB of internal storage in it. There is an Octa-Core Qualcomm Snapdragon 835 chipset. As per the GFXbench listing, the chipset used has max clocked speed of 2.45GHz with 8 cores which is the speed of Snapdragon 835. But previous rumors suggested about Snapdragon 836 SoC in the 2nd gen Pixel smartphones.

In the photography department, the Google Pixel 2 comes with 12MP of  camera sensor on the back which could be a dual camera setup. On the front, it has got an 8MP shooter. The smartphone runs Android Nougat 7.1.1 but could​come with Android O out of the box.