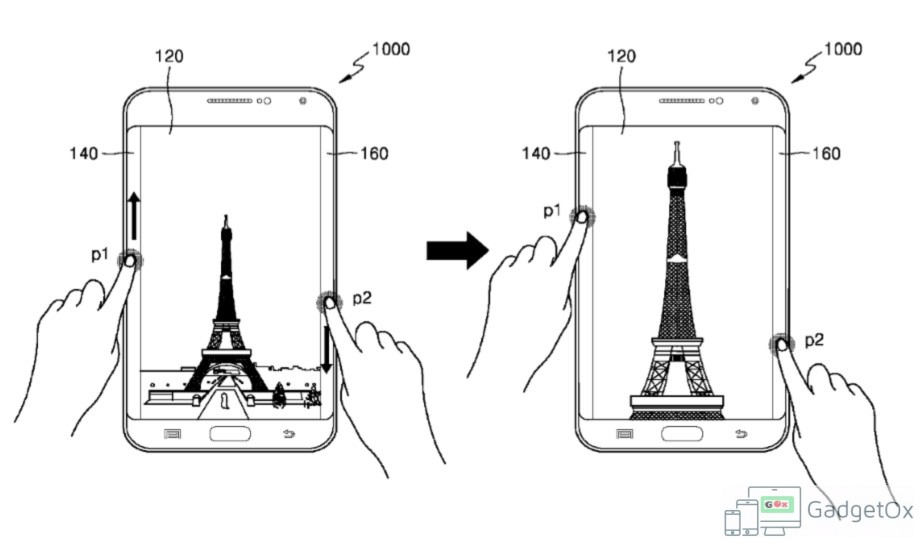 Check the images above and below. The design revealed in drawings look very similar to one of the leaked Galaxy Note 8 renders posted by well-known leaker OnLeaks.

Below is the Galaxy Note 8 render posted by OnLeaks. You can notice the striking similarity between leaked render below and the drawings in the patent.

Now coming to the Edge Screen Touch Feature, it seems that Samsung is working on to bring touch-enabled Edge Screen input to its smartphones starting with Galaxy Note 8. As one can understand from the drawings above and the description below, the smartphone will be able to read two touch interactions at Edge screens, started by fingers of the opposite hands. It will then identify the gestures made by fingers after touching the Edge Screen and would be able to do many actions on the smartphone display.

Using Edge Screen Gestures users may be able to invoke actions like locking the display, fast forwarding music / video play, Moving messages to top of inbox, Making messages hidden, Zooming in and perhaps many more. The Patent is in Korean with only this description in English.

Samsung has been using its Note series of Phablets to bring many new innovations on the table. So, Galaxy Note 8 packing Edge Screen Touch Input feature may not come as a surprise to many.