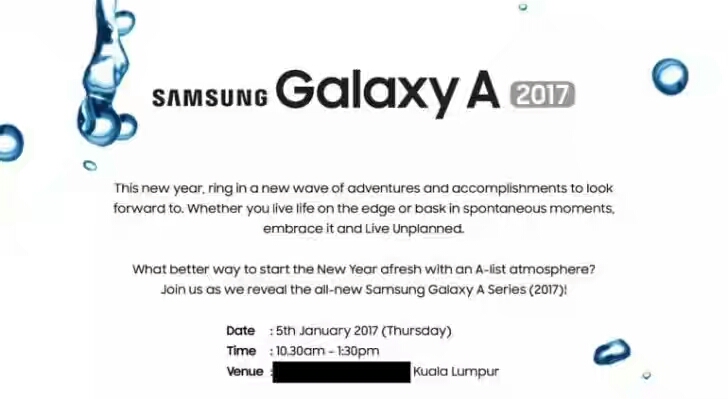 Just few minutes back we reported about Leaked renders of the upcoming Samsung Galaxy A3(2017) smartphone.

Now there are official confirmation about the launch details of the upcoming Samsung Galaxy devices. The company will be launching the 2017 Samsung A series on 5th January. The company has now sent out media launch invites in Malaysia. It seems like the Malaysia launch will be the global debut event for these devices.  The press invite has a line saying, ” This new year, ring in a new Wave pf adventures and accomplishments to look forward to. Whether you live life on the edge or bask in spontaneous moments, embrace it and live unplanned.

What better way to start the new year with afresh  new A-list of smartphones? Join us as we reveal the all new Samsung Galaxy A series(2017) .”

The launch event is scheduled for 5th January at an event in Kuala Lumpur, Malaysia.