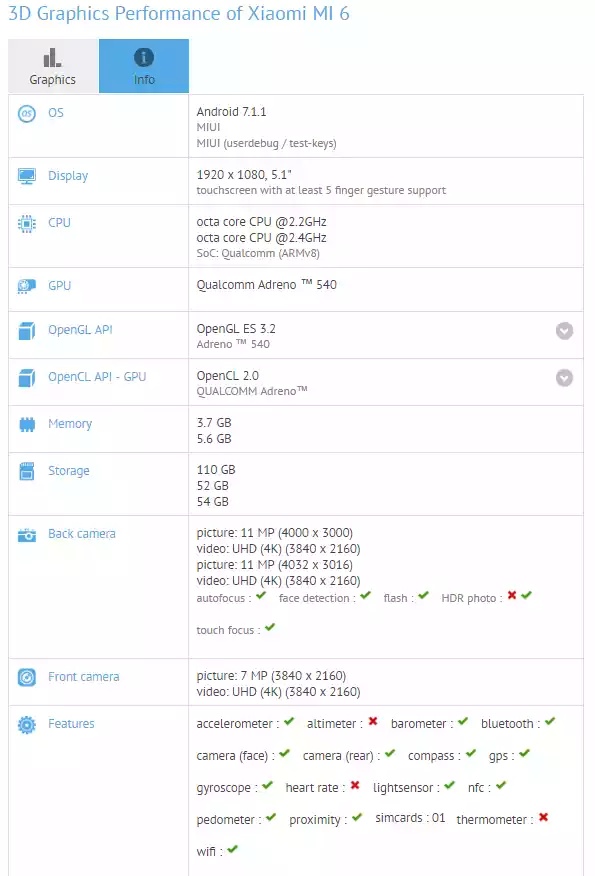 We have already seen many leaks and rumors about the upcoming flagship product from Chinese manufacturer Xiaomi, the Mi 6.

Recently we reported about some leaked hands on images of the Mi 6. The official press renders of purple coloured Mi 6 was leaked today. Recently we have reported that the upcoming Xiaomi flagship comes with a dual camera setup on the back side. Xiaomi has scheduled an event for 19th April to make it’s next flagship product Mi 6 official to the world. We have already reported about the upcoming Xiaomi flagship Mi 6 visiting the benchmarking site GFXbench where all the major specifications were revealed.

Now the Xiaomi Mi 5 has been​ spotted visiting the benchmarking site GFXBench listing with more details as the official launch is just hours away.

In terms of specifications​, the Xiaomi Mi 6 comes with a 5.1-inch full HD (1920x1080p) display which remains same as the Mi 5 in pixels at least. There is an upgraded 4GB and 6GB of RAM options. In terms of internal storage, it has got 64GB or 128GB of variants for different RAM combinations. The chipset used is an Octa-Core Qualcomm Snapdragon 835 with 10nm process. But there’s a catch, the standard variant with 4GB RAM gets Snapdragon 835 clocked at 2.2GHz and the Pro variant gets 4GB of RAM with 2.4GHz max frequency. It is same strategy like the Mi 5 which has underclocked Snapdragon 820 and the ‘Pro’ variant gets full throttling of Snapdragon 820. Other specifications include a new 12MP+12MP of dual camera setup on the back with a dual tone dual LED flash. There js an 8MP camera on the front.

The Xiaomi Mi 6 was expected to be unveiled at MWC this year. But due to shortage of the Snapdragon 835 chipset, Xiaomi has pushed it further. Pricing is expected to start for CNY 1999. It is scheduled to launch on 19th as per the latest confirmation from ​the company.