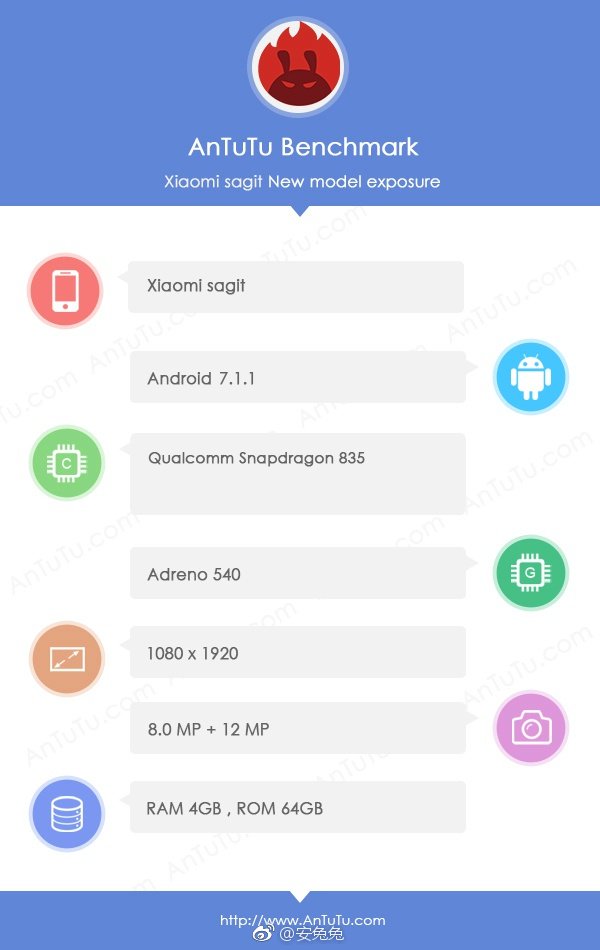 Recently we reported about the upcoming Xiaomi flagship Mi 6 visiting the benchmarking site GFXbench where all the major specifications were revealed. We have already shared the full leaked specifications of Xiaomi Mi 6 and Mi 6 Plus. The recent leak talked about it’s specifications and 11th April launch date. One more thing about Mi 6 was leaked that it is codenamed as ‘ Sagittarius’ internally

But now it has been spotted visiting another benchmarking site i.e. AnTuTu. AnTuTu listing also reveals some of the major specifications of the upcoming Xiaomi flagship. As per the AnTuTu benchmarking listing, the Xiaomi Mi 6 comes with a full HD (1920x1080p) display which was already confirmed with the GFXbench listing. Another important feature mentioned is 4GB of RAM and 64GB of internal storage. The chipset used is an Octa-Core Qualcomm Snapdragon 835 SoC which is most latest flagship chipset from Qualcomm. Other specifications include a 12MP of main camera with 8MP of front sensor.

The Xiaomi Mi 6 was expected to be unveiled at MWC this year. But due to shortage of the Snapdragon 835 chipset, Xiaomi has pushed it further. Pricing is expected to start for CNY 1999. It is scheduled to launch on 11th.