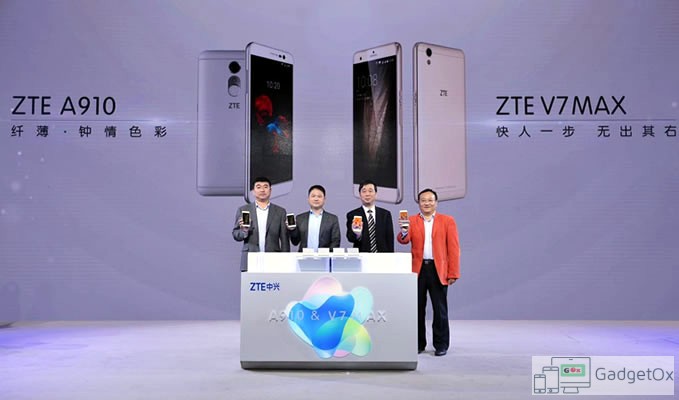 The ZTE Blade A910 is having 5.5-inch HD SAMOLED display with a Quad-Core 1.3 GHz MediaTek MT6735 processor. Other hardware include 2GB/3GB of RAM along with 16GB/32GB of internal storage. The device is having the very common 13MP rear camera with PDAF which is also coupled with an 8MP camera on the front. It is running Android Lollipop. It is also having a 2540mAh battery.

The second device in their portfolio is ZTE Blade V7 Max. It is having a higher 5.5-inch Full HD display with 2.5D glass. The ZTE Blade V7 is equipped with 3GB / 4GB RAM with 32GB of internal storage which can be expended via a Micro SD card. This device has also got an upgrade in the camera department also with 16MP camera on the rear & 8MP on the front.

On the other hand the ZTE Blade V7 Max comes in black, silver and gold color variants for a price of CNY 1799 for the basic 3GB RAM variant & CNY 19999 for the 4GB RAM variant.