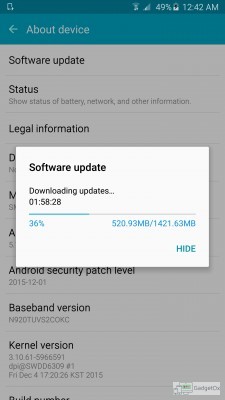 Samsung released their 2015 flagship phablet device back in 2015. It is a very good device & was launched with Android Lollipop as the base Android OS in it.

Company has already released the Android Marshmallow update for the Galaxy Note 5 in many countries. Now T-Mobile in the USA has also started rolling out the Marshmallow update for the Samsung Galaxy Note 5. The update brings some goodness of the Android Marshmallow announced last year which include Google Now on tap, new app permission settings, doze mode for battery saving etc. the update weighs 1421.63MB in size. We recommend you to be on WiFi while downloading this update. Downloading it on slow mobile data may cause failure.

It is worth noting that the changelog mentions that this update will delete the Facebook Messenger, Instagram, and WhatsApp ‘Functions’