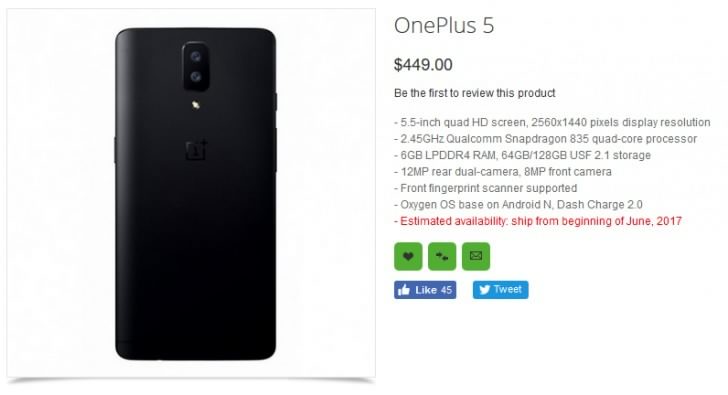 Earlier today we reported about OnePlus confirming the official name of it’s next flagship and some expected launch time. The next flagship from the Chinese player will be called OnePlus 5 and will be unveiled in this summer which is June – August.

We have already seen some reports that the successor to OnePlus 3/3T will be launched as OnePlus 5 instead of a ‘4’. The company is skipping 4 here because of some superstition in East Asians countries that means death. CEO Pete Lau had already posted a confusing teaser about company’s next product. The exact model number for OnePlus 5 was also leaked in previous leaks.

But now another important information has emerged online. The latest one is a listing by Chinese e-commerce retailer Oppomart.com . The opoomart website has listed the OnePlus 5 with Official specs. The official listing shows only the back side of the device. On the back it has got a dual camera setup. The phone is shown in Midnight Black colour. Below the camera module, it has LED flash which is dual tone. The OnePlus logo sits below that.

In terms of specifications and features, the OnePlus 5 is listed to come with 5.5-inch Quad HD (2560x1440p) display on the front. In terms of the processing power, the smartphone comes equipped with an Octa-Core Qualcomm Snapdragon 835 processor at a frequency 9f 2.45Ghz. There is 6GB of RAM in the upcoming OnePlus 5. It comes with the same 64GB and 128GB of internal storage variants based on UFS 2.1 .

In the photography department, there is a new 12MP dual camera setup. On the front, it has got an 8MP snapper.