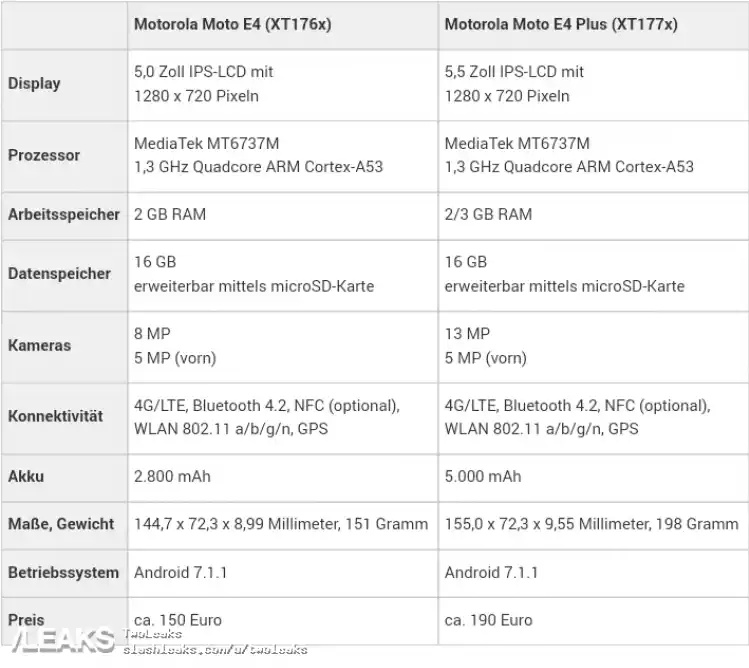 Recently we reported about ​a new Motorola smartphone with model number Moto XT1762 passing through the American certification agency FCC. It was reportedly supposed to be launched​as Moto E4. HD renders of Motorola Moto E4 were already leaked recently.

As per the latest leaked sheet the Motorola Moto E4​ comes with  a 5-inch HD (1289x720p) display in it. The display panel used is IPS LCD in it. It has got 2 Gigabyte of RAM in it. There is 16GB of internal storage with Micro SD card slot. Powering the device is a Quad-core 1.3GHz MediaTek MT6737M chipset in it.

There is an 8MP camera​on the front side with LED Flash. On the back, it has 5MP camera. Connectivity options include 4G LTE and Bluetooth 4.2 with optional NFC. It comes with Android Nougat 7.1.1 out of the box. Battery capacity of 2800mAh is there to keep up things running throughout a day.

The Motorola Moto E4 Plus comes with a bigger 5.5-inch HD (1280x720p) display which is also the same IPS LCD panel. It has got 2GB amd 3GB of RAM variants in it. For internal storage, we have got 16GB of storage and support for microSD card. The Moto E4 Plus also comes with same 1.3GHz Quad-core MediaTek MT6737M chipset in it.

For photography lovers, the Motorola Moto E4 Plus comes with 13MP of main camera with LED flash. On the front, we have got 5MP of main camera. One of the most awesome changes coming to the ‘Plus’ variant of Moto E4 is 5000mAh battery. Some basic connectivity options include Bluetooth 4.2, 4G LTE and optional NFC support.